As a recap, so far I have discussed:

-          marine source signatures, minimum phase conversion and resampling
-          assigning the 2D geometry, and some initial QC checks of the data

The next thing we need to look at is the seismic trace amplitudes.

The strength of the seismic reflections we see decreases with the depth of the reflecting surface. There are several reasons for this but the main ones are that:

Typically there are two different corrections needed to account for this; a spherical divergence correction and a gain function. These vary with geology, and so for any given dataset they are something we need to test and confirm before applying.

If you are new to processing it is worth a quick recap of testing approaches before you carry on.

There are usually many options for the spherical divergence correction; terms related to powers of the seismic velocity (V), offset (X) and time (T). This is a large parameter space to search from the outset.
Linear gain testing is usually based on a series of decibel per second functions (as opposed to amplitude scalars) which offers a simple way to express an exponential gain function.

A typical test “suite” would be to test a few of different spherical divergence corrections such as T2, T2V and perhaps T2V2, as well as linear gains of 1dB/second, 1.5dB/second and 2dB/second, and then review the results and adjust them if needed.

Here’s the output of a test sequence for different Spherical Divergence corrections. Corresponding amplitude decay curves are also shown. I’ve put a full trace balance onto each display so we can clearly see the relative amplitudes panel-to-panel. 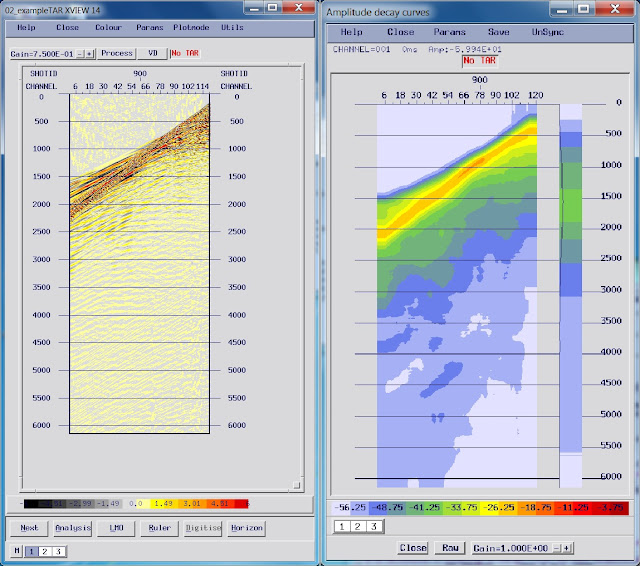 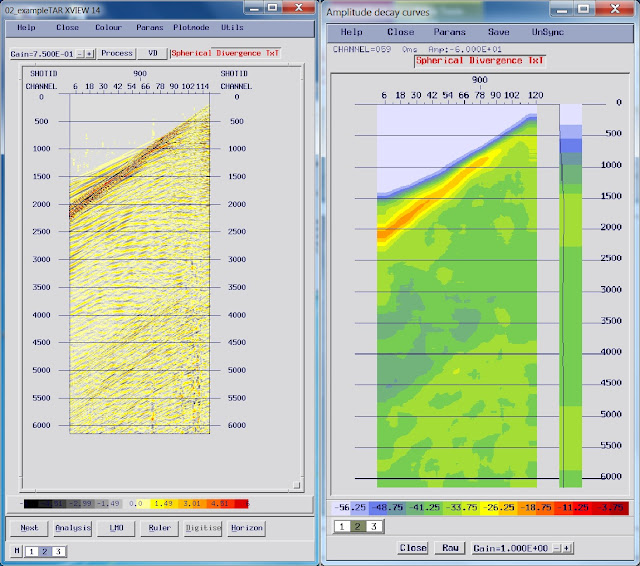 In this case, the middle panel with the T2 function looks to be better scaled than the T2V function; this is more obvious on the amplitude decay power spectra and curves.

In practice you should apply these tests to a selection of shots from the whole line, ideally looking at different geological settings.

It’s a good idea to generate a stack with your chosen amplitude recovery applied as well. 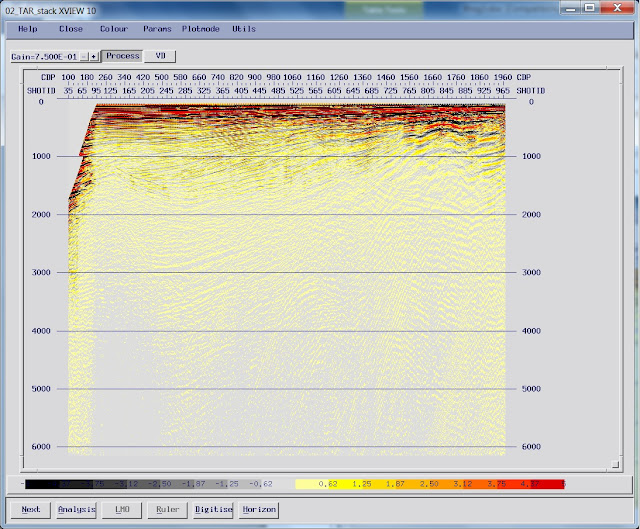 The stack shows that perhaps we could apply an additional linear gain, but as the shots are reasonably well balanced we can make that choice later if needed.

The other aspect of amplitude to consider is the presence of unusually high amplitude noise bursts.  There are a variety of possible causes, from sharks biting the cable though to digital spikes caused by loose connections in the cable (on older surveys). If we leave these in place they can cause significant problems, as can be seen in the example in the blog entry on Automatic Gain Control

One way to check for these “spike” problems is to look at the peak amplitude on every trace.  This analysis needs to be in a window that is under the direct and refracted arrivals, as these are high amplitude. Some software allows you to plot this as a graph over the data, but the best approach is to display it as a graphical colour coded display, with channel on one axis and the shotpoint number on the other.

The amplitude display plots are a useful way to look at the data, especially if there are a lot of spiking traces. Swell-noise bursts will tend to dip from upper-left to lower-right, as the cable is pulled through the area where the wave is breaking. Vertical lines are bad channels – you can see some unusually faint channels on this display.

Bad shots show up as horizontal bars – these can be caused by corrupted files or “misfires” where one or more airguns fire out of sequence.  On older systems electrical interference or short-circuits can corrupt the whole record.

Bad channels and bad shots are the key things to edit out; things like swell noise bursts can be addressed in other ways.

By: Guy Maslen
Posted by GLOBE Claritas at 22:09