We need to address and remove linear noise from the shot record; specifically the direct and refracted arrivals. If these are strong events, there can be reverberated “copies” (i.e. multiples) that can also cause problems and need to be removed.

There are three basic approaches we can take for this:


Using a mute to remove the direct and refracted arrivals is by far the easiest method.

Here’s an example of how you might pick the front mute on a shot at the start of the line:

There are a few tricks to picking the mute, especially in shallow water.

The first thing to remember is that the mute will need to have a taper applied;  depending on your software this may start at the time you have picked, end at that time, or be centred on that time.

The taper is needed to “soften” the boundary from the “hard” zeros to the actual data. Without the taper we could “clip” waveforms introducing artificially high frequencies to the dataset leading to artefacts when we apply further processing.

I’ve also picked the mute to avoid the few inner traces. This is important in order to preserve the sea-floor event, but it can be difficult to identify on shallow water datasets. Even if you can spot the event, the taper can suppress the amplitudes of this event depending on how it is applied.

We need to keep at least two traces on our shot gathers, because when we sort from 120-fold shots to 60-fold CDPs, the near channel (120) is only going to be the near trace in half of the CDPs – in the other half it will be the second-nearest channel (119).

At this stage it’s important not to be too harsh or aggressive with the mute – we can always tidy things up later but once you have removed data, you can’t get it back without re-running.

You need to step through the data checking the refraction mute you have picked is valid, adding in more control points where needed to spatially vary the mute with the geology. This is especially important if the water depth varies.

The problem with a mute is that it limits the information from the far offsets. Reflection energy is present in the far offsets and we can use it for picking velocities, imaging and AVO work, but we can’t see it under all that noise!

The next two approaches are based on linear dips either in the 2D fourier transform (FK) domain or the linear Tau-P domain.

Here are two shot records, from the start and end of the line, plotted out with their FK response underneath:

The biggest issue in removing this dipping energy is spatial aliasing. Spatial aliasing takes place when the apparent, linear dip of an event is so steep that it is impossible to tell from frequency and wavenumber alone, which way the event is dipping.
For example, consider a 31 Hz sine wave signal; this has a time period of (1/31) = 32.25 ms.

On the second panel the dip direction can be clearly seen as upper-left to lower-right, but on the third panel (where we have shifted by approximately half the time period) it is hard to discern the dip direction - it could also be lower left-to-upper right.

This is an example of spatial aliasing, and shows its relationship with frequency. With 25m between traces, 17ms/trace corresponds to 25/17=1.470m/ms, or 1470ms-1, which is approximately the speed of sound in water.

In other words, with a 25m spacing between channels, the linear direct arrival with an apparent velocity of around 1500ms-1 will be spatially aliased over 31Hz or so, which is exactly what we see on the shot records.
Spatially aliased linear noise – especially of things like the tail end of diffractions – is one of the significant causes of apparently “random” noise – if we can address this we will end up with a much cleaner section with improved signal strength.

If we only address the non-aliased part of the direct arrival with an FK domain mute, we get something like this on SP 900.

While the spatially aliased component is an issue, this approach has cleaned up a lot of the reverberating linear noise trains below the first set of refracted arrivals which couldn’t be touched by the front mute.
To get around the aliasing issue we can design a more complex mute shape in the FK domain, we still have some reflection energy around the K=0 axis at 50 Hz or so, which is going to be contaminated by the spatially aliased direct arrival.

Some modern data is acquired with this trace spacing, which is a great help in addressing this issue.

We can try and simulate this by interpolating the data from a 25 m channel interval up to a 6.25 m interval, and then using an appropriate FK domain mute, ideally with an “AGC wrap” to avoid amplitude issues.

The interpolation scheme here is relatively fast to run – it is a simple polynomial fit to the amplitudes at each time value, with an NMO applied to remove aliasing - and so leaves a residual aliased arrival, but critically this crosses the K=0 line at a much higher frequency (80 Hz+) at the top of the range we are expecting. We can design an FK domain mute to preserve the reflections and reject the linear noise much more effectively.

Comparing the FK results we get this:

The interpolated FK domain route is a lot more effective than simply applying an FK mute on the interpolated channels, and offers more advantages over the basic X-T domain front mute as linear noise throughout the shot record is also addressed.

The final approach to compare is the Tau-P domain muting (also termed “linear RADON”); we face the same spatial aliasing issues in the Tau-P domain as we did with the FK, so again interpolating the data to remove these will make a big difference.

In the Tau-P domain we can vary what linear dips we want to remove with the time (Tau) value, giving a lot more control than the FK domain.

Using high P-value counts than input data can help to remove aliasing issues, and so in this case I have used 960 P-values from a 480-channel shot. I’ve also displayed the linear velocities over the transform, in this case I used -1400ms-1 to 1400ms-1 to cover both positive and negative dips. The refractions and direct arrivals have negative dips because channel 1 is the far offset (this may be software dependent). The channel number is now the “P trace number” and the times have been padded as part of the Tau-P transform.

To attack the linear noise, I have designed a “tail mute” (green line) below which the data will be zeroed. As with other mutes (FK or XT), there will be a taper applied to the data which needs to be taken into account in the mute design.

When we apply the FK or Tau-P approaches we may also remove the seafloor event as the water depth is so shallow; it’s usually possible to avoid this by having a “start time” for the muting process.

In practice the choice of which approach to apply depends on the a number of factors, including the time you have available to test and apply different approaches, as the computation time of different transforms can be significant. The approach I have suggested is quite CPU heavy – to the extent you’d need to run it in parallel – and so key tests can be whether a smaller level of interpolation or fewer P-values can get the same results on your data.

You should check the results from each approach on shot records from the whole line, as well as stacks.

Other processes are also relevant – if you took the FK approach to removing swell noise you could combine this with an interpolation and FK-domain mute to address the direct/refracted arrivals and save computation time. Similarly we may need to use the Tau-P domain for deconvolution and can apply that transform only once, which saves processing time.

In this case, I’ve selected the Tau-P domain result to move forward with because of the improvement on the low frequencies (and the chance we’ll use it later on), even though it is expensive computationally.

To see the impact of the processing so far, it is also important to compare the stacked sections. 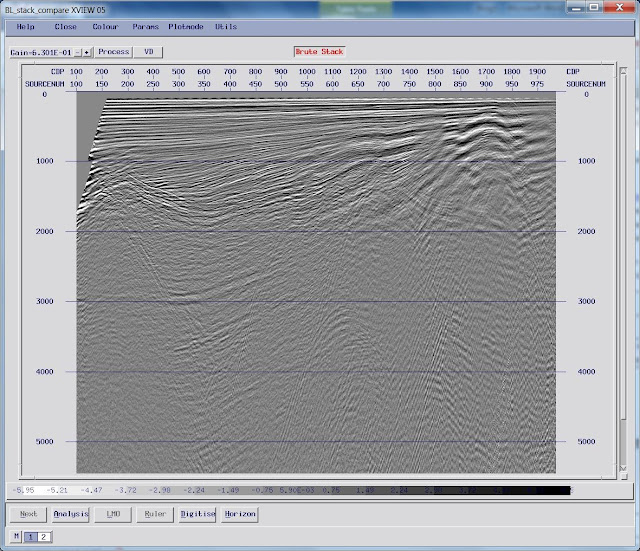 By: Guy Maslen
Posted by GLOBE Claritas at 20:09