In the last post we looked at some of the things that you need to bear in mind when you are performing velocity analysis.

This post continues with that theme and looks at how to identify some key issues as part of our quality control checks.

The most important thing to remember is that whilst we are trying to pick the velocities of seismic reflections, there are other signals that we can pick by mistake.
The main problems we’ll see are:
The velocity we are picking is the “stacking velocity” – that is to say, it is the velocity which in conjunction with the hyperbolic NMO equation is going to flatten the CDP gathers and allow us to stack the data.

This in turn is the RMS of the (P-wave) “interval velocity” within each of the isotropic layers.  There’s a useful page on these relationships here.

While the P-wave velocities for different lithologies vary significantly, the majority of multiples are caused by the water column. This leads to a corresponding interval velocity which matches that of seawater. Some typical ranges and values you might find are given below:

As well as incorrectly identified signals, we also have to watch out for simple mistakes and errors.  We can do this by looking both at the velocities (usually termed an isovel plot) and the stacked section.

Anomalously high or low values, relative to the overall trend, indicate a miss-pick or problem with the velocity field and show up as “bulls eyes”. These must be edited or removed.

While it is easy to see a single miss-picked velocity on this occasion, when dealing with a missed trend it can be much more challenging to spot. It is important to carefully compare the current stack to the previous one, looking for areas where there are improvements and places where the stack quality has degraded.

It’s also important to look at the stack while you are picking; a sudden lateral change in velocities can dramatically change the overall primary trend, but the multiples may be close to the primary trend you have been following. 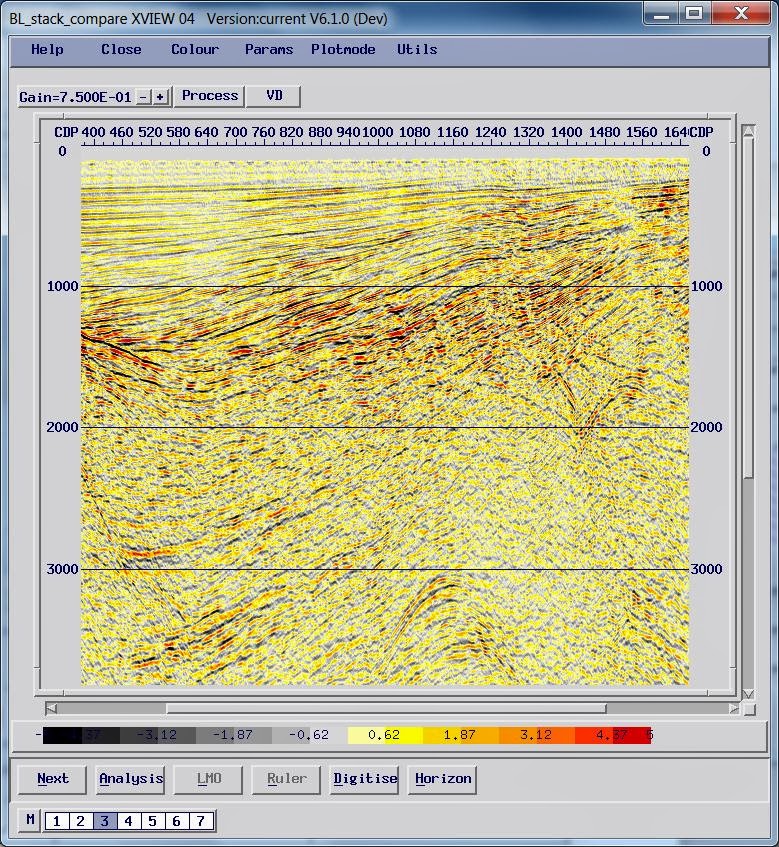 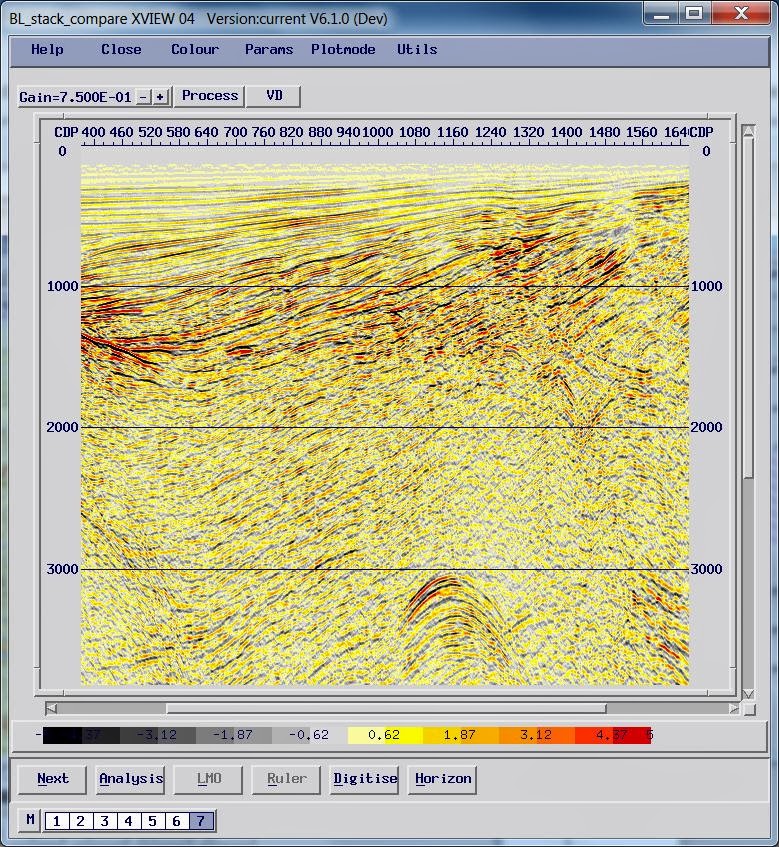 Of course, the stack is only one guide. We also need to look at NMO corrected gathers to make sure that the primaries are flat, the diffractions are up-dip, and the multiples are down-dip. It can be hard to judge “flatness” with a single velocity so comparing different velocity fields, or looking at 95%, 100%, and 105% of the stacking velocities, side by side is worthwhile.

At this stage in the processing the limitations we have on picking are the presence of multiples, diffractions, and dip. The velocities in and around the over-thrust at the high CDP end of the line vary rapidly, and it is difficult to identify the correct trend.

To improve further, we need to use the existing velocity field to remove the multiples, and then move on to pre-stack imaging of the data.

By: Guy Maslen
Posted by GLOBE Claritas at 13:08