One of the key issues in marine data is addressing the issue of multiples. Multiples are delayed reflections that interfere with the “primary” reflections we want to image. The delay occurs because the reflection energy has taken a more complex and longer ray path from source to receiver, reverberating between two layers that are highly reflective.

While any two layers with high reflectivity can create a multiple image, in general it is energy reverberating in the water column (i.e. between the seafloor and the sea surface) that is the most important issue to contend with.

There are three main ways in which to remove multiples:


We have already used the “signal processing” approach when we applied deconvolution to collapse the reverberations. So any further reduction in multiples is going to require a different technique/s.

The modelling approaches, such as SRME (Surface Related Multiple Elimination), usually require the primary seafloor reflection to be the first clear signal. This limits their application on shallow water lines such as this one, although there are some variations that can address this.

This leaves us with the velocity discrimination methods; I’m going to use the Parabolic Radon Transform (PRT) approach. The Radon transform is a generic mathematical procedure where input data in the frequency domain are decomposed into a series of events in the RADON domain. The PRT has been the “workhorse” demultiple method for many years; even when SRME is deployed it is often used to overcome limitations in the modelling.

The Tau-P transform is a special case of the Radon transform where Tau (intercept time) and P (slowness, slope, or parabolic curvature) represent two axes in Tau-p space. The data are summed along a series of parabolic tracks, each described by a curvature value (P). The user defines a number of P values to use as well as the total P range, which can be from positive to negative.

One of the key elements of the PRT as a demultiple method is that we usually apply an NMO correction of some sort to the data. This helps do two things: (i) target the primaries and multiples – for example we can use water velocity or a picked primary trend, and (ii) approximate the reflections (which are originally hyperbolic) through a series of parabolic curves.

There are different ways of considering the parabolic curvature (P) however one of the easiest is to look at the relative moveout (in ms) of the events at the far offset. This means a flat event has a P value of zero, up-dip events (NMO corrected with too slow a velocity) have negative p values, and down-dip events (NMO corrected with too high a velocity) have positive P values.

Here’s the same synthetic as before; this time it has a NMO correction applied with 90% of the primary velocities so that the primaries are up-dip and the multiples down-dip.

There are some key things to notice in this result.

Firstly, the PRT is only really effective when we have enough live traces – in the shallow part of the gather (down to ~500ms) with only 20 traces the events can still be seen, but they are smeared.  Below about 500ms TWT it is hard to make the PRT demultiple effective.

Secondly, the events form a “cross” shape in the X-T domain; this means that we can damage the primary (or the multiple) if we don’t transform a sufficiently large range of P-values (or we use too few values, causing the signal to be aliased).

Some other general points to consider are:


Here are some synthetic examples of the PRT demultiple in action, which show how important it is to tune the parameters defining the “multiple-zone”, and check the results! 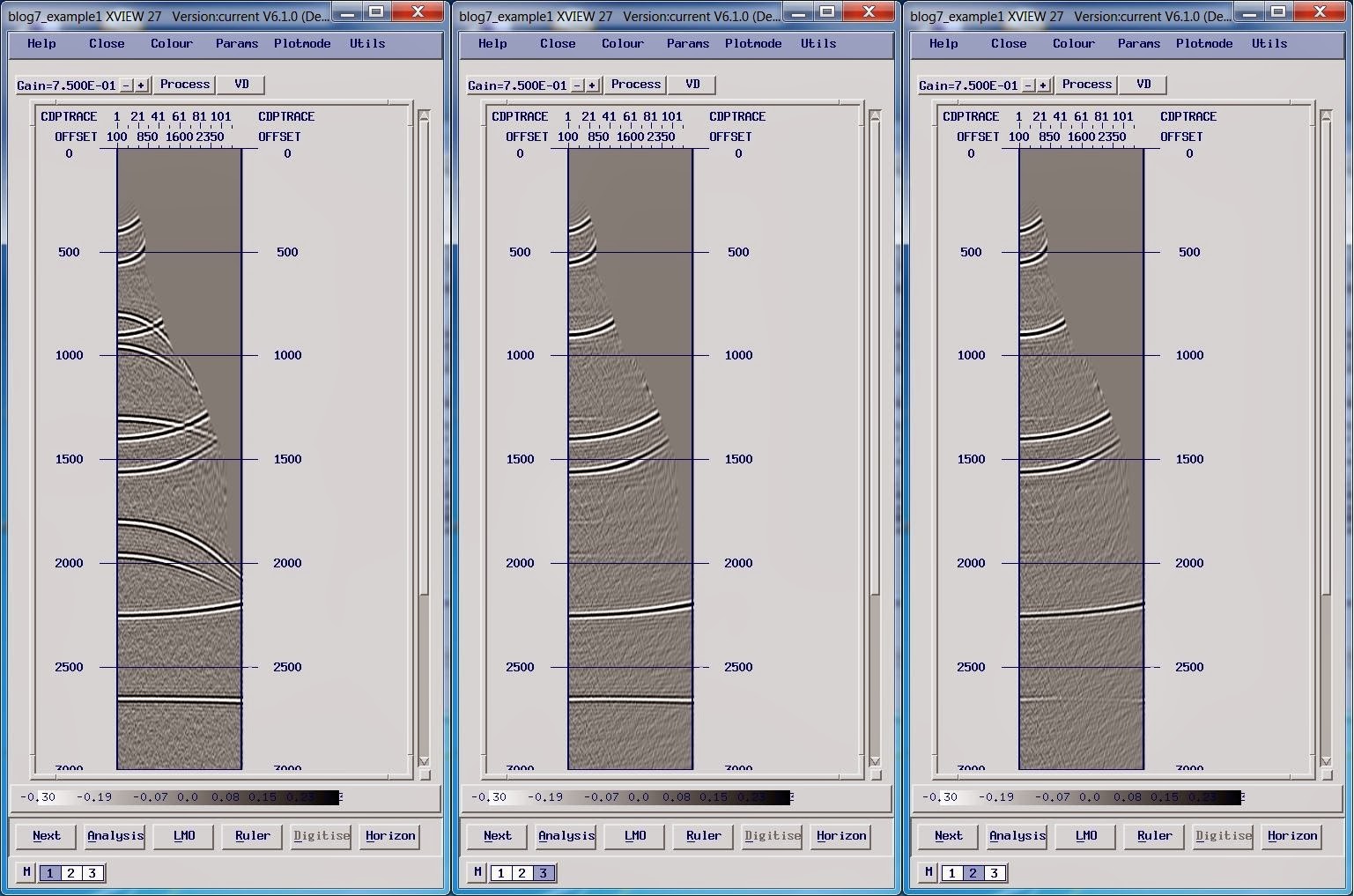 Here are some selected CDP gathers from the seismic line. In the shallow part of the section the multiples have been effectively managed by the deconvolution, however at depth (where the primary signals are weaker) there’s still a lot of multiple energy from more complex ray-paths.

The gathers have been NMO corrected with 90% of the picked primary velocity, so we can be sure the primaries will be up-dip, or at the very least flat.

To apply the PRT demultiple we need to look at the “far offset moveout” range we need for the data overall, and to define what part of the data we want to classify as multiples.

In this case I’m going to use a range of -300ms to +500ms, and as the primary is over-corrected (through applying a Normal Moveout correction with 90% of the primary velocity) I’m going to classify the multiple as having a far-offset moveout between +24 and +500ms.

I’ll also need to specify how many P-values to use; one way to approach this is to think about the total moveout range we are transforming, and what each P-value will represent.

Finally I’m going to form the data into supergathers. As I described in the post on geometry we have different offsets in the “odd” and “even” numbered CDPs, each of which has 60 traces.  If we combine these into a single supergather with 120 traces then each gather will have the same offset distribution, and we’ll have better resolution in the PRT domain as well.

Here are the results – remembering that the demultiple is only applied from 1400ms onwards:

This seems to have done a pretty efficient job at cleaning up the gathers; it will be a lot easier to pick the deeper velocities now, which should help with the imaging.

While it is important to check the results on the stacked data as well (with this dataset these are actually relatively small), the majority of the multiple ‘stacks out’ and our main goal is to make it easier to get an improved velocity analysis.

Having used our first-pass velocities to help remove the multiples we can now go back and check or re-pick the deeper velocities to further improve the image.

By: Guy Maslen
Posted by GLOBE Claritas at 19:38